SUMMARY: Florida roof contractor, Ad-Ler Roofing, Inc., supports the charitable project “Raise the Roof – A Mission for Veterans Day” by providing two of the three roofs that are being donated to three veterans in Southwest Florida.

FORT MYERS, FLORIDA, November 13, 2015 – Florida roof contractor, Ad-Ler Roofing, Inc., is co-sponsoring a charitable project to help provide a few local veterans with new roofs on their homes in honor of Veterans Day. The project is in conjunction with a fundraising event called Operation Impact, “Raise the Roof – A Mission for Veterans Day” and a golf tournament, “Golf’N Fore Roof’N.”

The event was conceived and implemented by The Affordable Homeownership Foundation & The Vines Veterans Association at Estero Country Club, whose mission is to replace the roofs and provide needed maintenance for three Veterans homes here in Lee County. Ad-Ler Roofing, Inc. is providing the roofs for two of the three veterans.

“At Ad-Ler we believe in caring for the outside needs of our community,” said Adam Currier. “When we heard about this opportunity to help these veterans and be a positive change in their lives we jumped at the chance!”

Antonio “Anthony” Arancio – Marine, served from 1948 – 1952. Anthony is 86 years old, and has lived in Cape Coral, Florida, since 1981. He was born on Staten Island. His saying: “The discipline the marines taught us stays with you for a lifetime.”

Ad-Ler Roofing completed the re-roof on Walter’s home and is finishing the re-roof for Anthony’s home this week. CFS Roofing will be completing Edward’s house before Thanksgiving. 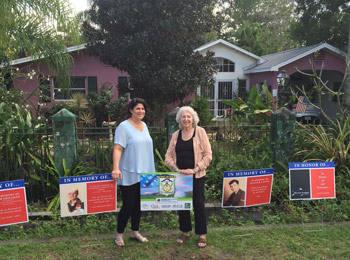 “It is a privilege for Ad-Ler Roofing to ‘Raise The Roof’ for these veterans who, when they were called to duty, served their country bravely and willingly!” added Adam “We salute and honor them with the chance to make a difference in their life’s and to thank them for their service to their country!”

The Estero Country Club and Affordable Homeownership Foundation Inc. raised over $68,000 in donations (cash and in-kind) at the Golf Tournament event “Golf’n Fore Roof’n,” which was held on Sunday, October 25th. This was followed by a Veteran’s Day celebration event on November 11th to unveil the completed re-roof at Walter’s home.

Ad-Ler Roofing, Inc. is a family-owned and operated business, since 1988, that provides quality workmanship, exceptional customer service and cost-effective roofing options in Florida. Whether it’s roof maintenance, new construction, roof replacement or roof repair, they have you covered. Serving Southwest Florida, Sarasota and Manatee Counties, the Tampa area and the West Side of Orlando.